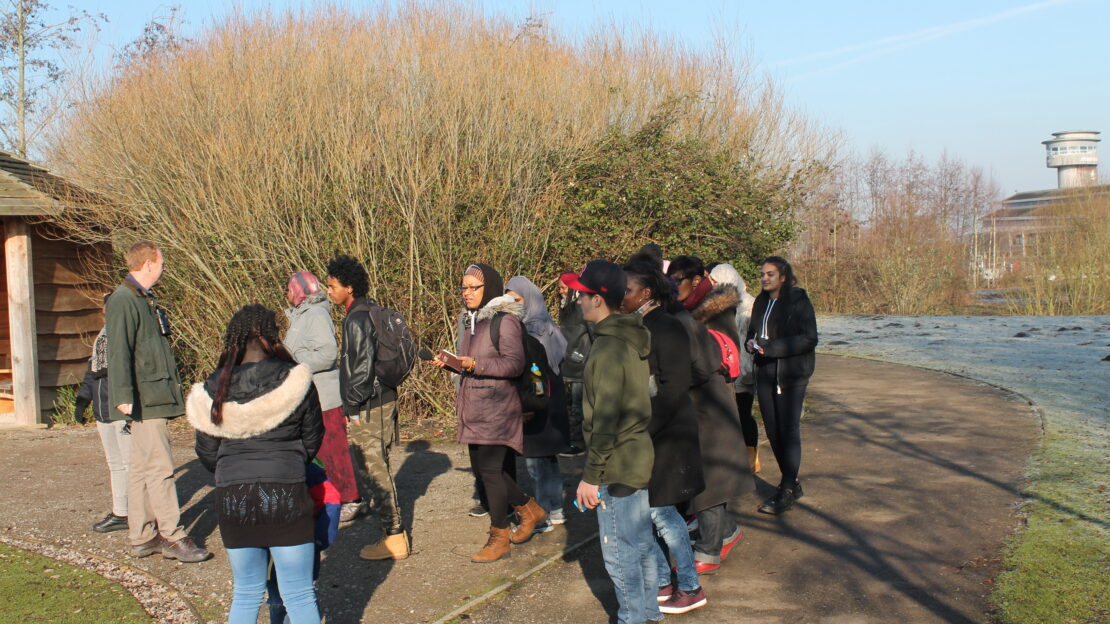 That project was led by Professor Richard Pancost at the University of Bristol Cabot Institute and Green & Black Ambassadors Jasmine Ketibuah-Foley and Zakiya McKenzie, with partners Ujima Radio and the Bristol Green Capital Partnership.

The ambassadors worked to understand barriers between Bristol’s environmental science and BME communities. As part of this they organised a trip to Slimbridge Wetlands Centre for local young people and ran a workshop with community organisers to find out about barriers people had to visiting places like this.

Being part of the activist movement in Bristol, something kept picking away at the back of my brain. I realised I could find almost no black or brown role models to look up to. Where were the culturally rich BME communities of Bristol who have so much to say about the environment, environmental racism and sustainability? Why were they not thriving in this supposedly inclusive space?

Bristol’s year as the European Green Capital in 2015 had many successes but it failed to include BME communities. The ambassador programme grew out of a series of conversations that followed about the need to pay, train and support a new generation of BME environmental leaders – Zakiya and me.

We are trying to find out why inclusion has failed so far and we’re challenging Bristol’s research and BME communities to work together. We have a radio show on Ujima, we run workshops and we took a group of BME people to Slimbridge wetlands centre outside of Bristol to explore why these nature attractions aren’t attracting diverse communities.

Zakiya and I come from community research backgrounds and worked as radio and TV broadcast journalists. Our passion to tell people’s stories and our brazenness in asking difficult questions with a healthy sense of justice fits well with the role.

The Sunday Times recently named Bristol the best place to live in the UK. As a black woman, single mother and mature student, I cannot help but wince at this misleading accolade. The difference in life expectancy between the city’s wealthy and deprived wards is as much as a decade. I grew up in Jamaica, studied in New York City and worked as a journalist in Johannesburg. I absolutely love ‘ole Brizzle’ – but nothing prepared me for the city’s virtual segregation.

In one of our workshops people told us they found it difficult to get the time to attend research events, particularly if they worked for small organisations with limited funds. Participants also found that they might be invited to events, but not to help set the agenda. Our task is to build bridges. We are honest about the barriers within our own communities and hold people to account. We are also here to challenge the environmental and science sectors to step outside of the pervading bubble of whiteness and masculinity as necessary for validity.

We have a daunting task but as we say in Jamaica “one, one cocoa fill basket”. By using our skills to fill the void in conversation, Jasmine and I are making way for better dialogue and real, inclusive actions.

If only one part of society is making decisions then we don’t end up with great decisions for our society. They might look great on paper, but if everyone you speak to looks the same as you do, you’re likely to all say yes to the same thing. That means decisions don’t get tested from as many angles and they usually won’t be as good.

If we want citizens to engage with scientists, then we must show that we’ve made commitments to their communities, that we’re engaged in the challenges they face, that we’re committed to addressing the flaws within our own institutions. It’s not enough to say “we wanted to champion diversity at our event but there are very few black scientists working in that area.”

Our efforts focused on BME communities of African or Caribbean descent. I hope future work will engage with more communities. Some findings, like the importance of using diverse venues at family or worker-friendly times, are likely to be fairly universal but many findings will almost certainly differ.

Long-term, our ambition is to see real and permanent change. Our goal is not simply to connect people via a few events but to challenge ourselves more deeply about our structures and behaviour. Therefore, we’ll be testing if we and our partners have embedded diversity in our practices. Are we still dependant on marginalised groups or on individuals like Zakiya and Jasmine taking the initiative for us, or are we changing how we build long-term relationships with communities? If these changes have occurred then these organisations, in partnership with NERC researchers, will be better poised to connect our findings to a wide and diverse part of the UK’s population.